Essay Ending with a Quote by William Gibson
Buck Downs

I think one of the hard things about poetry is that there’s not very much to do, in a direct or actual sense. You can be a more or less fully functioning and productive poet in about 30 minutes a day, most days, and most days, putting in more time would be a waste of sunshine and would not produce anything better than what already happened. Any poet with halfway decent work habits can finish more poetry in five years than could be read in twenty. So what’s to do with all the free time?

I may be letting the cat out of the bag here, and I apologize to my poetry peers for that. We poets, as a group, would like for it to be known that we are entirely swamped, yall. The demands of the world are too much on us, and if yall the world had a shred of conscience, you would stop bothering us with your picayune demands for love and the rent, et al.

So it’s hard some days; I roll out of bed and have hardly rinsed the crust of sleep off me before boom! another poem has appeared, in full and intransigent glory, and now I have three hours to kill until lunch.

Me, I have been so desperate for something to fill the ginormous blocks of time between poems that I have at times chosen work, and other related pursuits, that I am vocationally obliged as a poet to affect to despise as a totally bourgeois intrusion upon my liberty.

This may seem at odds with what you have heard from other poets, or even said yourself regarding the writing of poetry and time. But please take my word it: they are not to be taken seriously, these goldbricks who cry for more time. They have too much time already, and you know they do, because you can hear them every day, querying the hive mind about what show to binge watch next. The world should be your show, dipshit -- get out and star in it.

“I suspect I have spent just about exactly as much time actually writing as the average person my age has spent watching television, and that, as much as anything, may be the real secret here.” -- William Gibson, Source Code 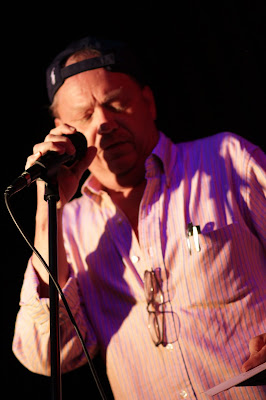 A native of Jones County Miss., Buck Downs’ latest book is TACHYCARDIA, available from Edge Books. His chapbook Shiftless(Harvester) was recently published by above/ground press. Buck is the poetry editor of Boog City, and works at Bridge Street Books in Washington, DC.

Email ThisBlogThis!Share to TwitterShare to FacebookShare to Pinterest
Labels: Buck Downs, On writing