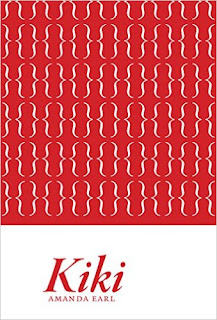 The brave new world in Amanda Earl’s first trade book, Kiki, happened almost one hundred years ago. In the bohemian villages of Paris and between the wars, when surrealism, modernism and hedonism were surging, the belief in true art seemed impervious to irony, self-doubt or marketplace considerations. If that go-for-broke artistic freedom feels a tad futuristic, it’s because most utopias are. And although nostalgia plays its part in waxing the contours of a seemingly flawless community (see: Woody Allen’s Midnight In Paris), Earl channels the era’s inventiveness by testing character studies of Alice Ernestine Prin, better known to history as Kiki, and Paris itself against the erosions of excess.

Earl expounds on each historical narrative in that order (the “Alice” sequence comes before “Tales of Montparnasse”) without trying to extricate the micro from the macro, or vice versa. That is, Kiki and Paris are interdependent, with neither capable of instilling the liberal freedoms of 1920s France without the other, and Earl’s commitment to that incidental partnership makes a titan of Kiki. It helps that Alice Prin was already an enormously brave and complex personality, asserting the independence of women well ahead of her time. But the “Alice” sequence makes a bid to explain that individuality, mapping a trajectory of honesty into empowerment that parallels Kiki’s unapologetic appetite for artistic and sexual expression alongside the creative approach taken up by modernist friends like Hemingway – in essence, a reaction to the traditionalism of previous generations in order to innovate (or, as Ezra Pound incited, “make it new”.) As a result, “Alice” captivates not because the title character is otherworldly, but because she is relatable, humanized.

These are the men between the wars that come to Paris and
expect to find… what? Life? This is too big a word. I sit in
their laps and they feed me, give me pearls. Shiny pure white
pearls. I devour these men and their brilliance. White pearls.
An Egyptian black cat. Stroke me. In these arms, salvation.
I’ll rock you to sleep, bebe. Mama will cradle you.

The above anecdote illustrates the ground rules for Kiki’s empowerment: that the pleasures of men should never come at the expense of her own. I shouldn’t feel compelled to explain that, nor pontificate on just how progressive such a mentality was, practiced openly in the 1920s, but alas, there is a fraction of men in the world — I will not venture how big or small that fraction is — that would no doubt share vitriol and condemnation based on the above passage. Some men remain intimidated by an empowered, sexualized femininity and it’s because of that population, often visible and yet anonymous in the comments section of articles about gender equality, rape culture or issues pertaining to the female body, that Kiki is a timely work of poetry.

Beyond my own surface commentary, however, the above excerpt also hints at the strain of Kiki’s stature among mostly male artistes. She’s intelligent and passionate about Dadaist developments in her midst but often relegated to the role of Man Ray’s accessory — a cheerleader out of bounds.

This is Alice. This is fucked up. Cowboys and Indians square
off on the walls of le Jockey. Men with wild west dreams
spoil for a brawl. The tables are nailed down. Dark suits
rub against dancehall floozies while I belt out “Les Filles de
Camaret se disent toutes vierges.” Pimps and goons hunch
over banquettes, chatting up wallflowers, their future
whores. I pass hookers on cobblestones beneath streetlamp.
In Man’s bed he wants to know why I’m always so hungry. (“Alice”, pg. 32)

With Ray’s oblivious remark, the male gaze again flits into view, shrugging off a dimension to Kiki that Earl commits great attention to: the realities of being poor and perpetually in character. Chronicling a day-to-day survivor, “Alice”’s diary avoids the steady arc of a biography (burdened as those often are by hindsight) and instead swings between the subconscious perspectives of Kiki and Alice. Her duality is abridged in the opening sentences of many entries — “This is Alice. This is fucked up.” — with Kiki’s agency contrasting Alice’s passive bewilderment. In a glance, one could see these alternating personalities as a convenient turn of cheek, letting vivacious desire overrun a soft-spoken moral center. But with so many entries mired in the hardships of poverty — whether that’s having her tightly wound corset stuffed with cotton in order to sell more shallots, or numbing herself with cocaine in order to make money for her ailing mother — the dual synergy of Kiki and Alice forms a survival instinct. Eventually, Kiki’s moments of clarity accumulate to a startling realization:

I am tethered by ribbon and iron hooks.
The men of Montparnasse. A not so tender trap?

Although previous passages I’ve excerpted were intended to augment Earl’s character study, they are just as notable for relaying the frenetic pulse of a Parisian nightlife that will not subside into background imagery. “Tales of Montparnasse” serves to further populate the character of place that supported Kiki’s joie-de-vivre by stitching together thematically linked texts Earl has cut up and selected at random. The resulting piece, ripe with the mention of famous avant-garde artists, displays a cultural zeitgeist through cracked panes, whereby each dislocated stanza presents a scene of abstract busyness.

The Saturday Evening Post
is serious as a death-mask.

Kisling and O’Keefe
rise like angels with horses. (“Tales of Montparnasse”, pg. 53)

Given Earl’s surrealist cues of construction, I trust that losing my coordinates in “Tales of Montparnasse” is at least partially by design. But without Kiki as my guide, or at least her degree of separation, I strain to uncover some hidden context here. (In a moment of panic, I even Googled unfamiliar names, hoping their art or biographies might unlock some subversive purpose to these experiments.) Ultimately a sensory re-read is more fulfilling and something Earl seems to encourage, signaling a gradual disassociation throughout the latter half of Kiki.

This downward spiral is engineered by tapping into the not-so-subtle drug-use that permeated the period’s devil-may-care spirit. Beyond its role in transcending logic and embracing surrealist ideas, ‘getting high’ provides a clever lens for Earl to forge ahead on, remaining true to Kiki’s challenges while linking two of the text’s most jarring transitions – “Opium” and “In which K meets B in a dream” – in a muddy state of consciousness. Utilizing source texts of Jean Cocteau alongside Earl’s own impressions, “Opium” wrestles self-assessment — a bed-ridden process of discovery, ecstasy and muted horror — through an hallucinatory lens.

I am the woman with the long black gloves. My eyes are dark.
I am the statue. I am the ox with harp and globe.
I am a smokestack. I am demolition. I collapse into rubble.

If a storm comes, Paris, the beautiful voyeur, will rub itself all over me.

I have written my name on a tree. Trees are better than marble because you
can see your name grow. (“Opium”, pg. 66-67)

“Opium” at first advances with the unerring slide of a bad trip: an early buzz of metamorphosis, that moment’s doubt, and then a cascade of self-destructive beliefs. Yet the tail-end, excerpted above, feels laced with resolution, at peace with the demise of identity in a way that “Alice”, with its confused and sober finale, couldn’t muster.

“In which K meets B in a dream”, another cut-up experiment (this one featuring text from William S. Burroughs’ Naked Lunch), formulates a conversation between Kiki and Burroughs. The pairing maintains Kiki’s theme of excess by comparing various drugs and, on an unspoken level, draws out the mindset that binds outsiders: coping with and trying to find their scene, their people, amidst the constraints of a square community.

These two domineering personalities play off each other as one might expect, with playful jabs and blunt opinions keeping the imaginary exchange sharp, but it would close the book as a curious diversion if not for our awareness of Earl as mediator. Throughout its four sections, Kiki’s experimental demeanour reaches further into Earl’s own subconscious. And with Kiki and Burroughs trading barbs as vapours of place and perspective, it’s the author who rises — a virtual stranger in these pages — to the station of torch-bearing innovator. Alice Prin’s life-story in Paris isn’t rewritten so much as relived through a variety of Dadaist and drug-fueled experiments. Much like the surrealist works of Dali or Ray, Kiki connects best when introducing the reader to his or her own confusion.

Given the close relationship that Earl has forged with the memory of Kiki over the years — visible through her website and Twitter handle — not to mention her own reputation as a self-proclaimed “writer of smut” and “pornographer”, it’s almost a shame that this appropriation of the avant-garde mantle doesn't include Earl’s own place and perspective in Ottawa. Maybe next time.


Writer's note: My thanks to Ted Nolan, who offered editorial advice on this essay in the fall of 2015. Due to a lapse in computer software, I was stuck with the program Pages and unable to see his Microsoft Word critiques for months. The opportunity to work together passed, but I credit several small clarifications in the overall readability of this review to him.
Posted by Ryan Pratt at 6:30 PM