We Who Are About To Die: rob mclennan 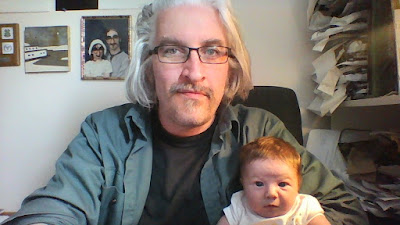 Born in Ottawa, Canada’s glorious capital city, rob mclennan [with baby Aoife at three weeks and two days] currently lives in Ottawa, where he is home full-time with the two wee girls he shares with Christine McNair. The author of nearly thirty trade books of poetry, fiction and non-fiction, he won the John Newlove Poetry Award in 2010, the Council for the Arts in Ottawa Mid-Career Award in 2014, and was longlisted for the CBC Poetry Prize in 2012. In March, 2016, he was inducted into the VERSe Ottawa Hall of Honour. His most recent titles include notes and dispatches: essays (Insomniac press, 2014), The Uncertainty Principle: stories, (Chaudiere Books, 2014) and the poetry collection If suppose we are a fragment (BuschekBooks, 2014). An editor and publisher, he runs above/ground press, Chaudiere Books, The Garneau Review (ottawater.com/garneaureview), seventeen seconds: a journal of poetry and poetics (ottawater.com/seventeenseconds), Touch the Donkey (touchthedonkey.blogspot.com) and the Ottawa poetry pdf annual ottawater (ottawater.com). In fall 2015, he was named “Interviews Editor” at Queen Mob’s Teahouse, and recently became a regular contributor to Drunken Boat. He spent the 2007-8 academic year in Edmonton as writer-in-residence at the University of Alberta, and regularly posts reviews, essays, interviews and other notices at robmclennan.blogspot.com

Where are you now?
I am sitting at my desk in my home office, during one of our toddler’s twice-a-week morning sessions at ‘school.’ I have less than two hours, from this moment, to get anything done before I am off to collect her.

What are you reading?
I’m really enjoying Rosmarie Waldrop’s new Gap Gardening: Selected Poems (New Directions, 2016) and about to begin on a whole stack of other titles, including Nelson Ball’s Chewing Water (Mansfield Press, 2016), Laura Walker’s story (Berkeley CA: Apogee Press, 2016), Emily Carr’s Whosoever Has Let A Minotaur Enter Them, Or A Sonnet— (San Francisco CA: McSweeney’s, 2016) and Margaret Christakos’ Her Paraphernalia: On Motherlines, Sex/Blood/Loss & Selfies (BookThug, 2016). I’ve also been rereading Sarah Gordon’s Rapture Red & Smoke Grey (Winnipeg MB: Turnstone Press, 2003), after finally achieving contact with the author (after more than a decade trying). I’m also reading Brian Michael Bendis’ incredible work over at Marvel, a company he saved from itself a decade or so back, when he destroyed and rebuilt the Avengers (among other things). I’m really enjoying his current run on Spider-Man; the Miles Morales stuff is fantastic.

A month or so back (on the day our new baby was born, actually), I finished reading Jean McKay’s remarkable Gone to Grass (Coach House Books, 1983). I do so hope she writes more books; I seem to have read them all, now.

What have you discovered lately?
American poet Matthew Henrikson has been a recent discovery, after his incredibly striking piece as part of The Volta’s tribute to C.D. Wright. I immediately worked to get my hands on his new book. Another recent discovery has been Inger Wold Lund, via her small chapbook Leaving Leaving Behind Behind (Brooklyn NY: Ugly Duckling Press, 2015). Incredible wow.

Where do you write?
I used to write in public spaces, but, given I’ve been home full-time with toddler for eighteen months now (since Christine returned to work after her year-long maternity leave), I do the bulk of my work from my little desk in my little home office. Given I spent so many years writing longhand in public spaces, it feels a strange shift. Once every month or two I’m still able to get a few afternoon hours of longhand at my favourite watering hole, The Carleton Tavern, but it might be a few more weeks before I can even consider such (given our newborn).

What are you working on?
Remembering to breathe, mostly. We’ve a newborn as well as a toddler, so things are a bit hectic. I’ve been attempting to complete a manuscript of short stories for some time now, and keep poking away, as well, on a manuscript of poems, “Cervantes’ bones.” But the main goal is the stories: once those are complete, I can once again dig into revisiting my post-mother creative non-fiction project, “The Last Good Year,” before finally returning to my attempt to rewrite “Don Quixote.”

Have you anything forthcoming?
Not at the moment, but that could change.

What would you rather be doing?
I can’t imagine anything better than this.

Map: for she articulates
our new, invented landscapes.

A declaration of staccato kicks
and wails.

A salted, sunny membrane
of gestures, squeaks and snorts.

Monopolized: we have not
learned their language.

than she still is, asks: Let me
hold her. Two ducks,

and impenetrable.
The contours

of a shapeless day.

Their mother, relieved
she finally out.

Email ThisBlogThis!Share to TwitterShare to FacebookShare to Pinterest
Labels: rob mclennan, We Who Are About To Die