There’s a point at which, when you’re funny, you think about stand-up. I mean, not me. Not seriously. Not for real.
This isn’t totally related, but there was a time in high school when the fourth or fifth person after antics or goofiness of mine said I should try out for the school play that I did. You had to sing. That was one thing. I had no imagination: all my troubles seemed so far away. Then you did a monologue. That was another. True, true, very nervous I have been and am. But why will you say I am mad?
The play that year was one of those school plays where the students make it up and it’s about, like, high school. So after I shrieked, Villains! Dissemble no more! ‘Tis the beating of his hideous heart! I had to improvise, Jesus Christ, improvise, a classroom scene. With me as the teacher. The students are acting up. What do I do? I don’t know how to improvise. I don’t know how to begin to improvise. Cheech and Chong is what I do. Cla-aass, through my nose.
I tanked. It scared me off the stage for years.
But a few years later, I had a friend who was funny, who wanted to do stand-up, who worked at the Olde Spaghetti Factory with some guys who performed at the open mic nights at Yuk-Yuks. We started work on a routine. “On a queer day, you can see forever.” That was the opening line. We liked Kate Clinton. We could recite all her routines. I thought the pope was on a catheter!
I forget my point.
Oh. I know.
To make my friends laugh. When I started writing it was to make my friends laugh.
I still think that’s a good reason.
It still pretty much is my reason, only now I hope to reach more people than just my friends, and I hope to make something happen that is more than just laughter. Although, “just laughter.” Why did I say that? See, that’s a problem. “Just laughter” is almost never “just laughter.” Because if you laugh at something because you recognize it, it’s about our common humanity, and if you laugh at something because it’s absurd, it’s a criticism or an observation about what we find meaningful or relevant, and if you laugh at it because you’re shocked and can’t believe a person would say that, it’s about what limits we set ourselves and why, and if you laugh because it’s clever, it’s about human ingenuity, and if you laugh and then can’t believe you just laughed, then it’s about how we use humour to deal with pain. And so on.
I struggle more and more with wondering if it matters, writing. Whether my writing matters. But I never question whether making people laugh matters. Weird, eh?
At the book launch for Gay Dwarves of America in Kelowna, I was lucky and happy to share the launch with Nancy Holmes, for her book, The Flicker Tree, which has its share of funny poems. So Nancy got the crowd laughing, and then it was my turn and they kept laughing. I stepped down from the mic and had that feeling: I killed.
Yeah. Those words: I killed. Comedy jargon. Stand-up jargon.
And then this little thought bubble. Hey. Maybe I could do stand-up. Maybe I’ve been thinking about it wrong all this time.  I thought you had to be funny, that that was the goal. But it’s not. The goal is something else. The goal is to tell a story. Make a point. Convey a character. Funniness is a side-effect.
We never finished that routine, my friend and I. We didn’t really know what we wanted to say. We didn’t have a point. We didn’t have a story. We didn’t have characters. We kept looking for good lines, for punchlines. We found some, sure, but they didn’t make up a routine. Not even five minutes. What we needed was a throughline.
I feel like I learn this same lesson over and over: don’t do it their way, do it your way.
Yesterday I heard a baby laugh. Kind of amazing when you think about it. It’s one of the first things babies do. They cry. And they laugh. And that’s pretty much it for the rest of our lives.
I don’t know. 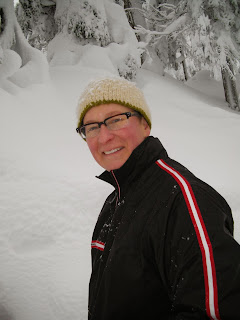 Anne Fleming’s latest book is Gay Dwarves of America (Pedlar 2012), whose stories netted some nice awards and nominations. Rumours of a poetry book are afoot, plus two novels with goats in them, one for children and one for adults. She divides her time between Vancouver and Kelowna, where she teaches at UBC’s Okanagan campus.
Posted by rob mclennan at 4:33 PM

Email ThisBlogThis!Share to TwitterShare to FacebookShare to Pinterest
Labels: Anne Fleming, On writing