I struggle sometimes to describe my own writing because I spend a lot of time thinking about how to try to teach others how to write. On the one hand I push a very programmatic and pragmatic approach which involves a sort of template-algorithm system of syntaxed gears and dictive cogs; writing is response to some basic ideas of genre and audience expectations. It is a lot of the same components driven by specific authorial choices that then elaborate into different communication machines that, despite their intricate differences, are all the same thing: communication machines, each one. An essay is a poem is a novel. It is here that repetition becomes the most important tool. Repetition here is the part that allows for a faster, cleaner machine, one that whirls instead of chugs. Repetition is the habitual that eventually turns typing into craft. Repetition is work and with each return loop, writing gets an incredibly tiny bit easier, a miniscule amount more transparent.

I struggle sometimes to describe my teaching because I spend a lot of time thinking about how to try to write to others. On the other hand I try to read far, far more than I write. I admire in others how a sentence or line can fulcrum with a small precision that reveals the larger impulse behind it. It is in those larger gestures that the machinations of a metaphor emerge, what bpNichol would call an exit or an entrance, what Ondaatje sees as Billy’s “beautiful machines pivoting on themselves,” machines under the tension of being simultaneously microscopic and macro-universal. It is here that repetition becomes the most important tool. Repetition here is the part that allows the reader a sturdy home to return to, a body of familiarity built from the cells of prepositions and nouns, the embryonic spilling of adverbs. Repetition is the mutation that walks out of an ocean. Repetition is joy and with each return loop, writing gets a tiny bit more mysterious, a miniscule amount more rewarding.

I struggle sometimes to describe my typing because it’s as messy and as personal as my scribbled longhand. I learned how to type on a lap-sized red machine that blinked letters and beeped when I punched the right key. Now I drift, fingers in bunches and never homerow, still struggling to look at the screen even when I’m uploading some part of my brain and/or face. It is here that repetition becomes the most important tool. Repetition here is the assemblages of avatars that weave in and out of an Internet user. Repetition is the copies of pages pulled from servers and brought back to me. Repetition is typing “the” as: left hand - middle finger “t”, index finger “h” then ring finger “e”. Repetition is virtual and with each return loop, writing gets a tiny bit more networked, a miniscule amount more intimate.

I struggle sometimes to admire the other hand, where the left is a template for the right and my fingers repeat ten times. Surely there is an audience who expects. Surely there is a genre simultaneously impulsive and clean. The components are pivoting, the fulcrums are algorithmic and the avatars are a space/sea craft aimed at the long loop of a return celestial/ocean voyage. It is here that repetition becomes the most important tool. Repetition here is the part of the walk that pauses before a sturdy metaphor. Repetition is a transparent noun. Repetitive is a potentially pragmatic adverb. Repeating gets a tiny bit more intricate, more joyous, more habitual with each essay or poem or novel. 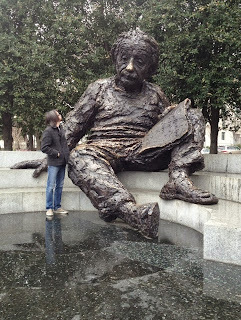 Aaron Tucker’s poetic works and reviews have been published across Canada. His chapbook, apartments, was shortlisted for the 2010 bpNichol Chapbook award. His current project, tentatively titled punchlines, is moving ever slowly forward, with the most recent iteration released by above/ground in summer 2013. In between all this, he has a regular podcast over at poetryadventure.ca

His collection of essays Interfacing with the Internet in Popular Cinema is going to be published by Palgrave-Macmillan in the summer of 2014.

In addition, he is a professor in the English department at Ryerson University where he is currently teaching essay writing and digital literacy to first year students.

He is working on learning chess in between watching his beloved Raptors lose games. You can reach him atucker[at]ryerson[dot]ca

Email ThisBlogThis!Share to TwitterShare to FacebookShare to Pinterest
Labels: Aaron Tucker, On writing