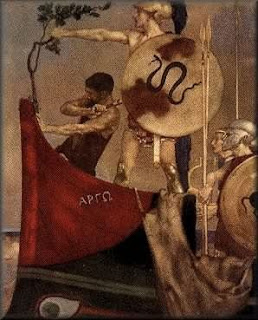 Anyone who has watched Question Period on Parliament Hill likely understands why politics turns a lot of people off. I’d wager that most people intrinsically care about counting ballots, improving government programs, standing up for what’s right and so on. But I’m far less optimistic that even a tenth of that population will watch, with hands clasped, as MPs play the blame-game across the aisle while the marrow of their issues gets cast aside. The art of speaking in circles can make a nihilist out of anyone and that apathy lands squarely in the crosshairs of Jason Christie’s Government.

Bearing no author’s name on its cover and opening with “The Golden Fleece”, a lengthy examination into the spectrum of political consumption, Government has the radical air of a manifesto. But notice I use the word examination and not attack; Christie isn’t keen on getting sucked into the vortex of identity politics as it would negate Government’s raison d’être. Instead this chapbook observes from the eye of the storm, underlining thoughts on materialism, ownership, conscience and ambition – existential subjects at the roots of litigious jargon. From “The Golden Fleece”:

3.
“It’s the abuse of
acceptable practice
that really puts
chapstick on my
grocery list. It’s
really that smile
and nod and smile
and smile when really
nothing hangs
balanced and
backpatting and
gladhanding and
co-signing and
winking and
book publishing and
obligatory face time and
it all amounts to
churning for the sake
of making someone
else superior because
that’s what you both
want, isn’t it? Necessity
and utility attached
to knowledge with
wonder shackled
to output and process
turns lush greenery
into rigid structures
that make us an
authority on rigid
structures.”

Sticking with “The Golden Fleece” for a moment, since its nine segments do occupy half of Government, there’s a copious amount of opinion anchoring this work that I don’t wish to downplay. Christie employs repetition to reduce meaning and spins unique phrasing to obfuscate simple points. Yes, strategies straight from the Question Period survival handbook! But even Christie’s opinion resists being politicized, choosing to anchor Government with a desire for simplicity rather than hinging the chapbook on a reader’s allegiance.

Christie’s stanzas cascade in tight fragments, creating tongue-in-cheek observations that pertain as much to society as to the parties which govern. Perhaps the most searing poem arrives with “Ceres”, wherein Christie speaks of the human condition as a cycle of wants and achievements that requires destruction for distraction. Heavy stuff, I suppose, but it maintains the un-preachy logic that matches philosophical food for thought with the satisfaction of a good read. Excerpt from “Ceres”:

“We demand, um,
a round planet
to conquer and
grapes to crush
and woods to raze
and my fingers
smell like bacon
what were we
demanding again
now that we have
our roundness and
promises of voyage
and desperate
skyward pleas
launched with
arcing smoke trails
which way is home
when everywhere
we look burns
new memories
into the fabric
of our great need” 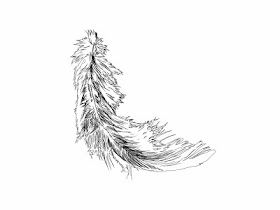 Sometimes the book you've recently finished and the new one you’ve just picked up compliment each other in unexpected ways. Fresh off of reading Jason Christie’s analytical Government, I turn to the wholly bucolic, undaunted echo-space of Jessica Smith’s Mnemotechnics. Betraying its tricky title, which refers to “the practice of aiding the memory”, these poems reside in a state of wakefulness untroubled by the march of humanity.

What makes Smith’s latest chapbook so imaginative – yet also difficult to transcribe – is her liberal use of spacing, which isolates outdoor imagery and one’s sense of place with a more meditative pulse. Occasionally, as in “warning”, spacing obstructs the very direction in which the poem should be read. I took these gray areas as cues to go off-trail, so to speak, and experience Smith’s details in new ways. Mnemotechnics’ content lends itself well to reorganization and, even when subbing one line before another, each fragmented string contributes to a rewarding sum, a greater awareness.

So there’s no rushing to identify the arc in “robins” or the unfinished Roger Tory Pederson quote in “canada geese”; one simply appreciates the scope. With each line as deliberate as a brushstroke, Smith constructs scenes on standalone details, which – like the birds she muses – contribute insights best when taken as a flock. Unlike Christie’s Government, this is very much a chapbook to cleanse one’s mind, to take outdoors and read with nothing but the breeze to assist it. In fact there’s probably no better way to approach Mnemotechnics, a work constantly conversing with nature. Read "ghost" below, captured authentically in an image snagged from above/ground press: 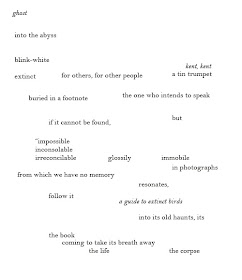